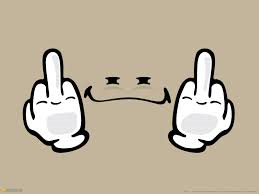 There is an art to being obnoxious. Some of us are naturally obnoxious, but even the naturally charming can learn to be obnoxious. Here are some tips:

Being obnoxious about others’ cherished beliefs is great fun. I have concentrated here on beliefs prevalent on the liberal left.  American right wingers have political and religious views that should be wonderful targets for obnoxious putdowns, but they won’t understand a critique of their views that goes much beyond simple mocking. Flooding their email-in-boxes with lengthy reading material is also a waste of time, unless you have stock in lip balms.

I have tested all of these techniques on Facebook. At one Point I realized that most of my intended targets were blocking my posts, so I deactivated my account, but I am being very effectively obnoxious at dinner parties and other social gatherings. By the time I stop getting invited, I will reactivate the FB account.

3 thoughts on “The Art of Being Obnoxious”