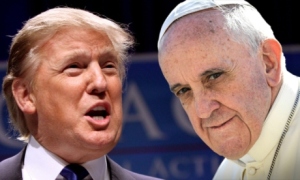 Donald Trump chats with Pope Francis (Based on actual quotes)

DT: The concept of global warming was created by and for the Chinese in order to make U.S. manufacturing non-competitive.

PF: A very solid scientific consensus indicates that we are presently witnessing a disturbing warming of the climatic system.

PF:  If present trends continue, this century may well witness extraordinary climate change and an unprecedented destruction of ecosystems, with serious consequences for all of us. A rise in the sea level, for example, can create extremely serious situations, if we consider that a quarter of the world’s population lives on the coast or nearby, and that the majority of our megacities are situated in coastal areas

DT: This very expensive GLOBAL WARMING bullshit has got to stop. Our planet is freezing, record low temps, and our GW scientists are stuck in ice.

PF:  The exploitation of the planet has already exceeded acceptable limits and we still have not solved the problem of poverty.

DT: Part of the beauty of me is that I am very rich.

PF: Many people forced to emigrate suffer, and often, die tragically; many of their rights are violated, they are obliged to separate from their families and, unfortunately, continue to be the subject of racist and xenophobic attitudes.

DT: I don’t have a racist bone in my body.

PF: Those who seek to deny a home to the migrant, to the African and the Muslim, risk their membership in the church.  Satan himself is a metaphor or a personification, for the collective evils of mankind. Today, these evils manifest foremost as racism, intolerance, religious persecution and bigotries of all kinds.