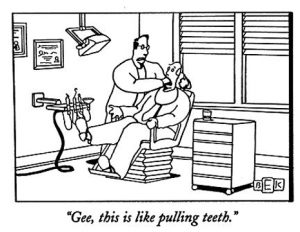 While I was dropping off to sleep last night, it suddenly came to me that I used a cliché in my blog post about the supposed health benefits of saunas “Sweat Your Way the Radiant Health.” I wrote that the Internet is a “double-edged sword” thus breaking one of George Orwell’s six rules of good writing: Never use a metaphor, simile, or other figure of speech which you are used to seeing in print.

“Double-edged sword” is a pretty hackneyed phrase, but I instinctively reached for it as a way of saying that the Internet has both positive and negative aspects. Other clichés I might have used don’t quite convey the same idea. “A dog’s breakfast” implies more of a mess, and “a mixed bag” isn’t quite strong enough. I could have made up my own metaphor, say, “an animal with two heads,” but nobody would know what I meant. I could have just spelled it out: The Internet provides a lot of information, but much of it isn’t reliable, which would sound even more pedestrian than the cliché. Maybe in the context, the statement is superfluous and didn’t need to be said at all.

In a Guardian piece called “In Defense of the cliché,”* Orin Hargraves writes, “Clichés in speech are more acceptable than clichés in writing. Still, listeners and readers absorb clichés like diners absorb comfort food. Only when there is a glut of such fodder do we feel that creativity has failed. Most of us have something to say, most of the time, and most of the time it is not something that calls for startling creativity. Clichés provide a stock of dependable formulas for conveying the ordinary, which is often the central subject of our discourse.”

In any case Orwell’s sixth rule is “Break any of these rules sooner than say anything outright barbarous,” indicating that the “rules” are really just guidelines.