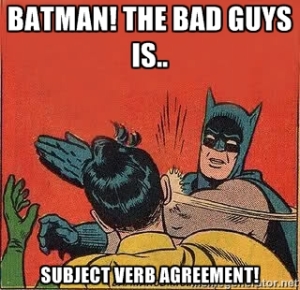 At a time when few agree about anything, subjects and verbs still have to.

Our ear is often a good guide to subject/verb agreement. Few speakers make the mistake of saying, “I does.” A singular subject takes a singular verb, and plural subjects take plural verbs. Verbs that are used with he or she are singular; verbs that are used with we or they are plural: The boy (he) walks. The boys (they) walk. But sometimes choosing between a singular and plural verb can be tricky.