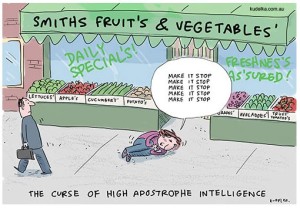 Apostrophes cause many writers problems. The use of the apostrophe has become so problematic that the British actually have a society for the protection of the apostrophe: http://www.apostrophe.org.uk/

The apostrophe has two uses: 1) to show possession, 2) to take the place of missing letters in contractions.

my brother’s lawnmower = the lawnmower of (or belonging to) my brother.

the river’s edge = the edge of the river

Note that the person or thing doing the possessing gets the apostrophe. Unless you can recast the phrase showing possession with “of” or “belonging to,” the apostrophe is wrong.

Make plural nouns that end in s possessive by putting an apostrophe after the s:

Make plural nouns that don’t end in s possessive by putting an apostrophe s on the end.

Compound nouns like brother-in-law make just the principal noun plural: brothers-in-law. Both the singular and the plural possessives of such nouns are made with an apostrophe s after the final word:

For the singular possessive of names that end in an s sound, you have a choice.

The plural possessive of such nouns is regular:

For nouns that jointly possess something, only the second noun is possessive:

Jack and Jill’s lawnmower (The lawnmower  belongs to both of them.)

Sometimes the thing “possessed” is understood

Colbart’s lawnmower is sharper than Cecil’s. (The meaning changes considerably if you don’t make Cecil possessive.)

Periods of time can have a possessive construction:

Use the apostrophe to take the place of missing letters or numbers in contractions:

Change the following phrases into possessive constructions with apostrophes

Rewrite the following as contractions:

Add or delete apostrophes in the following sentences