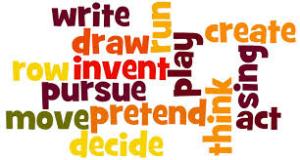 Linking verbs do not express action. What they do is connect the subject of the verb to additional information about the subject. Look at these examples:

Aunt Edna is a kleptomaniac.

The verbs is, seems, and feels in these sentences do not stand for actions; they link the subject (Aunt Edna) to the noun kleptomaniac and the adjectives crazy and great. Linking verbs function a bit like an equal sign. A linking verb always links the subject to a noun or an adjective, not an adverb (most adverbs end in –ly). No one would say, “Aunt Edna feels greatly.”

Some verbs can be either action or linking verbs depending on the context. The verb feel is such a verb. Aunt Edna can feel (an action) the material in the sweater she’s about to steal, or she can feel bad (she probably doesn’t) about stealing it. If I said, “Aunt Edna feels badly,” I would be treating feels as an action verb, and it would mean that Aunt Edna’s sense of touch is bad. You can see that there is some logic here, but logic be damned, a large number of native speakers of English don’t hear “feels badly” as an error. We can either make a fuss about it or accept the reality that usage doesn’t always follow the rules. But you can say “feels bad” and feel smugly superior to those who say. “feels badly.”

Look at these examples of action and linking verbs:

In A) grows and smells are action verbs; in B) they’re linking verbs.

Decide whether the verbs in bold type are action verbs or linking verbs: