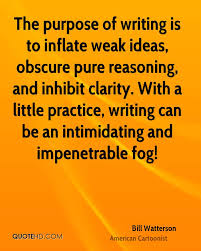 There are some good reasons for writing wordy, incomprehensible prose. Suppose you need to write about some topic, but what you have to say is mostly simple and obvious. You’re afraid you will look like a fool.   But it is possible to take the simple and obvious and make it really complicated and obscure. Here’s the thing: If no one can quite figure out what you’re talking about, some will think it’s their fault, not yours. The more time they spend trying to understand it, the more they will want to believe that it is indeed profound, and in the end, they will pretend to understand it. Writing obscurely takes practice. Here are some guidelines:

Try applying these seven strategies to the following simple sentences and compare your revisions with mine. Strive for maximum obscurity.