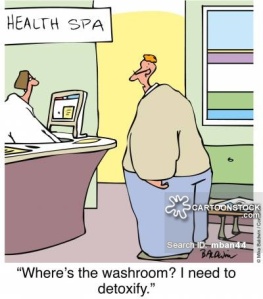 We were flying back to Victoria from New York. While we were waiting to board the plane at JFK, our name was called to come up to the departure gate desk. I was hoping we had been bumped up to business class, but, alas, the young woman at the desk just wanted to check our documents. While she was looking at them, she sniffled a little, and my wife asked if she had a cold. “No,” the young woman replied, “I’m doing a detox, and the toxins are leaving my body. It feels miserable, but it’s worth it.” My wife shot me a look that said, “If you open your mouth, I will kill you.” I wisely kept my mouth shut.

But when we got back to Victoria, I started to write an email to the airlines customer service dept. that I had composed in my head on the plane.  I gave the precise details of our departure time and flight number, a description of the young woman (I had failed to read her name tag), and the following message:

“Please pass the following information on to the young ticket agent who served us: The idea that we need to periodically detoxify our bodies is a complete scam peddled by charlatans and quacks…

Then I stopped. What, I asked myself, do you think you’re doing? The airlines customer service dept. will think I’m some sort of crank and probably won’t pass my message on to the young woman. And even if they do, is it likely to have any effect? Trying to convince somebody who has bought into the detox myth that it’s nonsense is a little like telling somebody who has just gone to confession that their sins aren’t really forgiven. You can’t, as they say, reason people out of things they weren’t reasoned into in the first place. Maybe the psychological benefits of believing you’ve cleansed your body of non-existent toxins far outweigh the deficits of magical thinking.

There is of course the ethical question: Charlatans and quacks are making a fortune selling detoxification to the gullible. But why should I make crusade out of exposing them? Are they really worse than the purveyors of fast food and sugary drinks? I don’t send email messages to airline customer service departments urging them to pass on information about the health risks of drinking Coke.

Detoxification with its juicing, fasting and colon cleanses is a particularly egregious example of pseudoscientific quackery, but the entire health food and diet industry is pretty wacky.

I decided that I have to relax and not get so exercised about others doing and thinking things I don’t agree with. I started to fear that I have totalitarian tendencies and would have made a good Stalinist apparatchik. “So, Comrade, you been buying gluten-free, have you?”

I deleted the email. I shudder to think that it’s still out there in cyberspace, and my wife will one day discover it.

2 thoughts on “The Detox Myth”