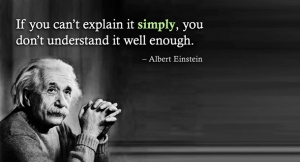 What makes good writing good? I suppose it depends on the purpose of the writing. Language is used mostly to communicate ideas and information. But that’s not all it’s used for. In the case of poetry, for example, language is the medium of an art, so it is conveying much more than ideas and information. By using the sounds and rhythm of words in addition to their meanings, poetry can evoke emotions and images that could never be captured in prose. But the sounds and rhythms of words can also contribute to the message of prose. There is poetic prose—think of Martin Luther King’s “I Have a Dream” speech—and prosaic poetry such as Joyce Kilmer’s poem “Trees.”

At the most basic level, writing that is intended to communicate information is good when it is clear and understandable. If in addition to being clear, writing intended to communicate information soars to poetic heights using the devices of poetry, so much the better. For the most part, though, unclear prose does not rise to the level of poetry just because it’s unclear. Consider these sentences of the French postmodernist writer Gilles Deleuze:

“In the first place, singularities-events correspond to heterogeneous series which are organized into a system which is neither stable nor unstable, but rather ‘metastable,’ endowed with a potential energy wherein the differences between series are distributed … In the second place, singularities possess a process of auto-unification, always mobile and displaced to the extent that a paradoxical element traverses the series and makes them resonate, enveloping the corresponding singular points in a single aleatory point and all the emissions, all dice throws, in a single cast.” The Logic of Sense (French: “Logique du sens”) 1969.

To be fair, of course, this passage is taken out of context and is a translation from the French. But it is hard to imagine a context in which these two sentences comprising 86 words could be comprehensible. Perhaps Deleuze had some profound thought that he intended to communicate, but he failed. It is simply bad writing. And as Nietzsche said, “Those who know that they are profound strive for clarity. Those who would like to seem profound strive for obscurity.”