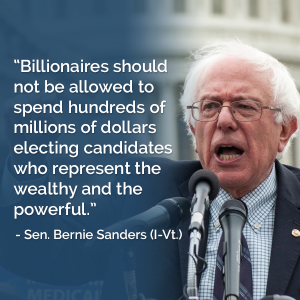 It is amazing, to me at least, that independent Vermont Senator Bernie Sanders, who calls himself a democratic socialist, has emerged as a viable candidate in the Democratic primary. The U.S. seems to be relentlessly center-right and is beginning to resemble an oligarchy much more than a democracy. The Republican Party has moved to the extreme right of climate change denial and religious fanaticism.  Not very long ago the word “liberal” was a term of opprobrium comparable to “atheist” even in moderately conservative circles. But all of a sudden, a  self-declared socialist is drawing huge crowds, raising record amounts of money, and posing a real challenge to establishment favorite Hillary Clinton for the Democratic nomination. What’s going on?

Of course, many nervous Democrats are convinced that Bernie Sanders can never win a general election, even against Donald trump if Trump actually manages to win the Republican nomination. Socialism, they think, with its aura of big government, tradition of stick-it-to-the-rich rhetoric, and plans to redistribute the wealth via fairer taxes, is still enough of a boogeyman to a sizable section of the American electorate that the Republican attack machine would eviscerate Sanders in short order. Also, Sanders’ most enthusiastic supports are young voters—apparently not as turned off by the socialist label as many older voters—who notoriously don’t show up to vote on Election Day.

But the same nervous naysayers argued eight years ago that the country was simply not ready to elect an African American with an exotic name, a Kenyan father, and Muslim relatives. They were wrong. Demographic changes in the country have given minority voters, especially African Americans and Latinos, enough political power that it’s the Republicans who have to worry about their ideological image. Donald Trump, the front runner for the Republican nomination, has further damaged the Republican brand with his extremist, anti-immigrant, xenophobic rhetoric. If Trump becomes the Republican nominee, Sanders, in addition to being a democratic socialist, would suddenly become the anti-Trump candidate for the vast majority of minority voters who have good reasons to fear a Trump presidency.

Bernie Sanders constantly deplores the ever growing inequality of wealth and excoriates Wall Street and the billionaire class for not paying their fair share of taxes. In this regard he has a lot of credibility. He has accepted no donations from Wall Street and he has no super pac to go after donations from the super wealthy. Hillary Clinton, on the other hand, has received $600 thousand in speaking fees from Wall Street giant Goldman Sachs. And we wonder why no one on Wall Street was ever held accountable for the economic meltdown of 2008. Bernie Sanders doesn’t wonder, and he isn’t shy about exposing the enormous influence of money in American politics.

It may well be that the Billionaire class fears a Bernie Sanders candidacy as much as some Democrats do. Unlike the nervous Democrats who think Sanders can’t win, the nervous billionaires think he just might. Could that be why billionaire Michael Bloomberg, the former mayor of New York City, has said that if Bernie Sanders is the democratic nominee, he will run as an independent?

Here’s a scary scenario: In a three-way race, a Republican, even Trump, could pull off a win.

Let’s hope Bloomberg decides it isn’t worth it.