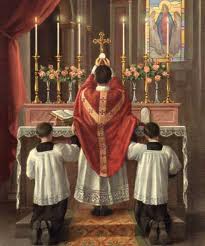 Removing our tefillin (https://en.wikipedia.org/wiki/Tefillin) after a weekday morning synagogue service, a fellow worshiper and I started reminiscing about serving weekday Masses as altar boys in our youth. We could both remember trudging through the snow (he, in Edmonton and I, in Denver) to serve weekday Masses as early as 6 am. And there were always parishioners in attendance, not all of them elderly. In the 1950s and ‘60s, there were devout Catholics who would attend mass before going to work. Perhaps there still are.

It was amazing how similar our experiences had been. In both of our respective churches there had been priests known for speeding through the liturgy of the low Mass at breakneck speeds. They were great because Mass could be over in thirty minutes. But I had some problems with one such speedy priest. That early in the morning, I was often a little drowsy, and even when I was fully rested and awake, my mind wandered. At various times in the Latin Mass, the altar boy on priest’s right was supposed to ring bells, called Sanctus bells as it happens, that were next to where  the altar boy was kneeling. (https://www.youtube.com/watch?v=KRwGTtNBw-w)  For example, the altar boy would ring the Sanctus bells when the priest intoned “Sanctus, Sanctus, Sanctus” (“Holy, Holy, Holy”).Remember, in those days, the priest faced the altar and had his back to the worshipers, including the altar boys. I could never remember to ring the bells at that point. For one thing the priest was praying fast and mumbling, and, of course, I was daydreaming.  He complained bitterly to me a couple of times after Mass, and when I told him I could never hear him saying “Sanctus, Sanctus, Sanctus”, he told me to watch for the movement of his vestments. Just before intoning those words, he would spread his arms slightly and join his hands, and if I watched carefully, I would see his vestments move.

Truth be told, had my mind not been wandering, I probably could have heard the Sanctuses, but now I was eager to make amends, and I watched the back of the priest like some predatory bird waiting to pounce on a small rodent. Suddenly I saw the vestments move as he lifted his right arm. I grabbed the bells and shook them furiously. The priest was scratching his side. I’m pretty sure he started requesting that I not be assigned to serve at his Masses.

My friend didn’t try to top my stories—Who could?—but we both recalled taking sips of the sacramental wine when the opportunity presented itself. All altar boys must have done that. It wasn’t the consecrated wine, of course. We had our limits.

I left the synagogue with a pleasant sense of nostalgia.