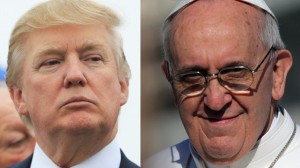 This is the second imagined conversation between Pope Francis and Donald Trump, using actual quotations on a variety of subjects.

Donald Trump: The concept of global warming was created by and for the Chinese in order to make U.S. manufacturing non-competitive.

Pope Francis: A very solid scientific consensus indicates that we are presently witnessing a disturbing warming of the climatic system.

Donald Trump: You can’t use hairspray because hairspray is going to affect the ozone. They want me to use the pump because the other one, which I really like better than going ‘bing,’ ‘bing,’ ‘bing,’ and then it comes out in big globs, right? And it’s stuck in your hair, and you say, ‘Oh my God, I got to take a shower again, my hair’s all screwed up,’ right? I want to use hairspray.”

Pope Francis: Regrettably, many efforts to seek concrete solutions to the environmental crisis have proved ineffective, not only because of powerful opposition but also because of a more general lack of interest.

Donald Trump: Part of the beauty of me is I’m very rich.

Pope Francis: We have created new idols. The worship of the golden calf of old has found a new and heartless image in the cult of money and the dictatorship of an economy which is faceless and lacking any truly humane goal.

Donald Trump: I can’t apologize for the truth.

Pope Francis: Everything is connected. Concern for the environment thus needs to be joined to a sincere love for our fellow human beings and an unwavering commitment to resolving the problems of society.

Pope Francis: Racism today is the ultimate evil in the world. When Italians, Spanish or French turn back the boats of African migrants seeking a better life, are they not like the inn keeper who told Mary and Joseph that there was no room for them and the infant Christ? These migrants are children of God and we are commanded to love them!”

Pope Francis: Let anti-Semitism be banished from every heart.