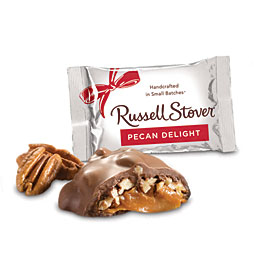 I had an odd experience in a drugstore. I dropped in to buy a Russell Stover Pecan Delight:

It’s a delicious treat. When I went to pay for it, the young woman at the cash register picked it up to scan the price and said with an ironic smile, “You came in just for this?”

I was taken aback. She said it the way you might say to somebody “You’ve actually come into a drugstore in your underwear?”

“Well, “I explained, “I was actually shopping at the supermarket next door, and it doesn’t carry these.” Then I added defensively, “I plan to share it with my wife.” Was I afraid she would think I was going to eat it by myself in the car? She laughed and said “Well, enjoy.”

“Oh, I will,” I said stupidly. Shit, I thought. I should have said we will. Now she will think I was lying about sharing it with my wife. But why do I care what she thinks?

On the way to the car I thought of things I could have said:

“Oh, are single purchases not allowed?”

“I beg your pardon.”

“Mind your own business.”

Had I responded with any of these, I would have felt even more foolish. But why did I feel foolish in the first place? How quickly our self-confidence is shaken.

But now I have a real problem. How can I go to buy a Russell Stover Pecan Delight at that drugstore again without buying something else?

This is the downside to shopping at Costco. I don’t need anything else the drugstore sells and won’t for months. I could go somewhere else to buy the Pecan Delight, but I have no idea where else they’re sold. The drugstore is so convenient.

I could wait until the young woman isn’t working, but I was so flummoxed that I didn’t get a really could look at her. All I really saw was that mocking smile. Anyway, how would it look to be loitering outside the drugstore and leering in?

Could the drugstore be training staff to ask such questions in order to discourage purchases of single items? That doesn’t make any sense.

Then it dawned on me. I could just go in and buy a whole box of the bloody Pecan Delights. I’m pretty sure buying a whole box would elicit some ironic comments too, but I wouldn’t have to set foot in the drugstore again for a long time. Staff turnovers are pretty fast in small businesses.

Suddenly I could see myself jumping out of the car at stop lights to go to the trunk and get out a Pecan Delight. Obviously, I couldn’t trust myself with a whole box of Pecan Delights hidden in the trunk.

I could ask somebody going into the drugstore to buy one for me. What excuse could I come up with for not going in to buy it myself? No, that was too risky. Whoever I asked could mention that he or she was buying it for a crazy person, and the young woman would know immediately that I was the crazy person.

I finally decided to ask the manager of the supermarket to start carrying Russell Stover Pecan Delights and for the time being to make do with Snickers Bars. Sometimes in life you have to make sacrifices.

One thought on “Life Can Throw Us Some Curves”