I used to be a walking encyclopedia of jokes (and hackneyed expressions), some of extremely bad taste that I could share only with a few friends, and many pretty good more or less tasteful ones. Now I can hardly come up with a joke.  I just can’t remember them as well anymore. Maybe it’s cognitive decline. Some friends seem disappointed that I no longer tell jokes the way I used to, or maybe I’m misreading looks of relief as disappointment.

But I have noticed recently that I recall cartoons with no difficulty. It could be that my particular variety of cognitive decline hasn’t affected visual memory. I love good cartoons. When I was on Face Book, I used to post cartoons regularly, and they were far and away the posts that got the most likes.

Lately, I have noticed that describing a really funny cartoon is a good substitute for telling jokes. You wouldn’t think that would be the case. Hearing a description of a painting is nothing like seeing the painting itself. Maybe because the effect of a good cartoon is very much like the punch line of a good joke, cartoons translate more easily.

And it is relatively easy to come up with cartoons appropriate to various conversational topics. Suppose you’re talking about visits to doctors. There’s a wonderful New Yorker cartoon that has a man with a knife in his back sitting across from a doctor at a desk. The doctor is reading a report. The caption: “Good news! Test results show it’s a metaphor.”

Let’s say good health and mortality have come up in conversation. Once again from the New Yorker: The Angel of Death has knocked on a door, and someone inside has asked who it is. The caption: `Take a wild guess, butter boy.”

Has someone just started a fasting diet to get rid of the toxins in her body? Rather than pointing out that the whole idea detoxifying the body by fasting is nonsense on stilts, you describe a cartoon that shows a man at a reception desk of a health spa. The caption: “Where is the washroom? I need to detoxify”

These descriptions of easily recalled cartoons seem to be good conversational gambits, and describing them generally takes a lot less time than telling a joke. Here are the three cartoons I’ve just described: 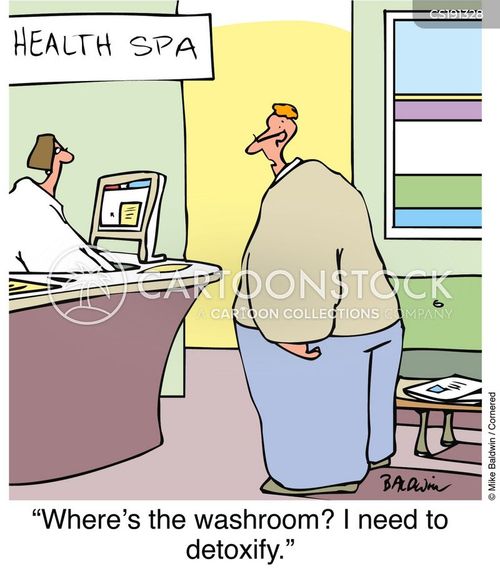