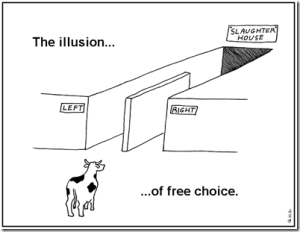 Many of the so-called New Atheists believe that free will is an illusion. Sam Harris, a very militant New Atheist, puts it this way:

“I generally start each day with a cup of coffee or tea—sometimes two. This morning, it was coffee (two). Why not tea? I am in no position to know. I wanted coffee more than I wanted tea today, and I was free to have what I wanted. Did I consciously choose coffee over tea? No. The choice was made for me by events in my brain that I, as the conscious witness of my thoughts and actions, could not inspect or influence. Could I have “changed my mind” and switched to tea before the coffee drinker in me could get his bearings? Yes, but this impulse would also have been the product of unconscious causes. Why didn’t it arise this morning? Why might it arise in the future? I cannot know. The intention to do one thing and not another does not originate in consciousness—rather, it appears in consciousness, as does any thought or impulse that might oppose it.”

Here is a question then for the militant atheists: Why try to convince anybody that atheism is the correct position to take, since deciding whether to accept the arguments against the existence of God surely requires free will. If Free will is an illusion, we have no say in what we believe, nor, for that matter, do atheists. Presenting, say, a young Earth creationist, with scientific evidence that the Earth is 4.5 billion years old, presupposes that the young Earth creationist can freely decide to change her opinions on the basis of evidence.

Richard Dawkins, the dean of the New Atheists, admits that blaming people or giving them credit is inconsistent with the absence of free will, but “it is an inconsistency that we sort of have to live with otherwise life would be intolerable.” https://www.psychologytoday.com/blog/experiments-in-philosophy/200901/can-atheist-believe-in-free-will

I agree. Arguing would be pointless.

3 thoughts on “If Free Will is an Illusion….”