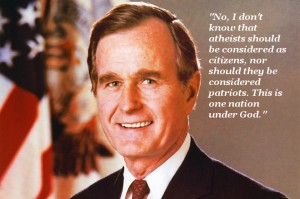 The Richard Dawkins Foundation has published a letter by British Roman Catholic Bishop Declan Lang denouncing the persecution of atheists in Bangladesh, several of whom have been hacked to death recently by fanatical Muslims. https://richarddawkins.net/2016/03/stand-up-against-the-persecution-of-atheists-around-the-world/

People don’t normally think of atheists as a persecuted group, but in fact they suffer severe discrimination in most Muslim countries.

Atheists face less discrimination in western countries, of course, but in the U.S., which is far more religious than most other western countries, atheists aren’t exactly encouraged to openly profess their lack of faith. Dr. Azim Sharif conducted a study in the United States showing that aheists are considered by believers to be less trustworthy than rapists. Dr. Azim also found that Atheists have lower employment prospects than the general population, although presumably not in fields like Physics. http://www.azimshariff.com/articles/do-you-believe-in-atheists-distrust-is-central-to-anti-atheist-prejudice

The Catholic bishop’s defense of the atheists may reflect the ability of one minority to see itself in the shoes of another. After all, Catholics are also a minority in Bangladesh.  First they came for the atheists…

Christians are a solid majority in the U.S., but many, especially those on the political right, are constantly complaining that they are the ones being persecuted. In fact, American popular culture is often hard on fundamentalist and evangelical Christians. Positive portrayals of Catholic priests are rare in American movies. On the other hand, if Dr. Sharif is to be believed, a rapist would have an easier time than an atheist getting elected President. In fact, the constitutions of seven states in the so-called Bible Belt ban atheists from holding public office. Then there’s the so-called war on Christmas. It’s hard to believe that signs saying “Happy Holidays” instead of “Merry Christmas” really signal a war on Christmas, as some American Christians claim. The popular Christmas song “Happy Holiday” was composed by Irving Berlin and 1941 and sung by Bing Crosby in the in the 1942 movie “Holiday Inn.” Was that movie the beginning of the war on Christmas?

Ron Paul, the right-wing libertarian Republican and former Congressman, has claimed that the war on Christmas is part of a wider war on religion in general. http://archive.lewrockwell.com/paul/paul148.html

According to Paul, the founding fathers envisioned “a robustly Christian yet religiously tolerant America.” He claims that both the Declaration of Independence and the Constitution are “replete with references to God.” The Constitution, of course, never mentions God at all, and some of the founding fathers were deists, not Christians. So was Ron Paul lying or was he simply so eager to identify as a member of an oppressed minority that he saw references to God in the Constitution that weren’t there? Probably he was just pandering to his right-wing Christian constituency.

We live in a time when many are competing for the mantle of victimhood, probably because it places those who lay claim to it on the moral high ground. Real victims are often overlooked.  Kudos to Bishop Lang for standing up for Bangladeshi atheists.