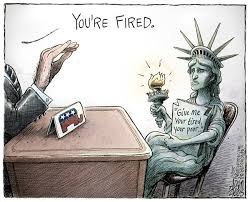 The presumptive part has never more important; it means that barring some catastrophe such as Trump having a fatal accident, he will be the nominee, but in his case, desperate Republicans may be planning the fatal accident.

The attack ad is brutal and entirely predictable. Throughout the primaries Trump mercilessly mocked and denigrated his opponents, and there are plenty of clips of them and Mitt Romney calling him everything but a serial killer. You have to wonder, though, whether having establishment figures like Jeb Bush and Mitt Romney saying nasty things about Trump actually hurts him. After all, his entire campaign was predicated on the notion that the professional political class consists of idiots who talk a lot but never manage to do anything.

A more effective attack ad might feature guys in T-shirts and baseball caps throwing darts at a picture of Trump and shouting “Spic lover!” After all Trump hires illegal Mexican immigrants to work in his hotels. The sort of voters that might give him a chance of winning in the rust belt don’t care if he’s a narcissist, one of the epithets  establishment types throw at him. They don’t even know where Narcissisia is. But he has surely screwed plenty of guys in T-shirts and baseball caps in his career as a celebrity billionaire business man. Alas, it’s hard for the Democrats to go there. They’re playing by a different rule book.

Donald Trump’s steady rise in the Republican primaries surprised and baffled political pundits every step of the way, and they continue to scratch their heads now that he has finally triumphed. He broke every rule in what everybody assumed was the rule book. He insulted and denigrated key voting blocks, mocked and derided not just his hapless opponents, but a prominent war hero and a disabled reporter. How did he do it?

“Despite this despicable behavior, we are encouraged to feel excitement and glee in seeing others suffers. As we cringe outwardly at the barbs that are thrown at the well-meaning contestants, we inwardly giggle in guilty pleasure at seeing the failing contestants in pain. Most of the joy of reality TV is not in seeing contestants succeed, but rather in seeing them not only fail, but fail in the most humiliating ways. We celebrate every luscious moment of this depravity!”  https://www.psychologytoday.com/blog/the-power-prime/201101/popular-culture-reality-tv-is-not-reality

Has American politics become a reality TV show? If so, we have to hope Hillary Clinton doesn’t become the contestant everybody secretly wants to see humiliated and crushed.