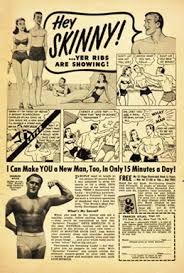 Years ago I was working out three days a week at the university gym, which was a short walk from my office. My workout partner and I did some running, but mostly we lifted weights. Once when I got back to my office after the workout, I suffered a sort of short-term memory loss. For example, I found a type written page on my desk that I had clearly written, but I couldn’t remember writing it. For a minute, I thought it was an administrative memo because I was having trouble understanding it. It was very alarming. I had a feeling of disorientation that took an hour or so to pass.

The internet was just coming into its own, and my workout partner suggested that I find a weight-lifting discussion group and see if anybody else had my unsettling experience. I found the group without much trouble and posted my question together with a concise explanation of what had happened. The responses I got were jaw-dropping. They mostly consisted of taunts. “Do you find your wrist is a little loose, faggot boy?” “That’s a queer problem. How much weight are you lifting, Daisy?”

I told my workout partner, and all we could come up with was that the weight-lifting culture of that particular discussion group was a bit macho and any complaint of short-term memory loss or mild disorientation after lifting was a sign of being a girly boy. I might have mentioned that I was a librarian, not a very manly occupation. Maybe it was my use of the word “disorientation.”

In any case, it happened again, and I decided to see my doctor. The doctor ordered a CT scan, and I worried for a few days about having a brain tumor. I considered sharing my worries with the weight-lifting discussion group but decided against it. I doubt that real men get brain tumors and if they do, they don’t worry about it, or if they do worry about it, they probably keep it to themselves.

The doctor’s receptionist left a message on my phone saying the CT scan looked “pretty good.” I immediately called back and said “What on earth does pretty good mean?” She put me on hold. “The doctor says the scan was normal, but he wants to see you.”

The doctor went over my weight-lifting routine with me. I told him that after lifting, we took a sauna and then a cold shower.

“How long are you in the sauna?”

“And then you take a cold shower?”

“It’s a strain on your heart, and you’re probably getting a spasm in a blood vessel that’s causing your memory problems and disorientation.”

“So knock off the cold showers and for a while reduce the amount of weight you’re lifting. Stop trying to be so macho.”

One thought on “Machismo”