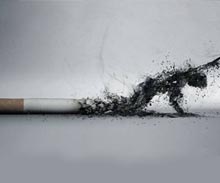 Probably the most agonizing thing I have ever done is give up smoking. Throughout the 1970s and 80s my wife and I were avid smokers of at least a pack of cigarettes a day each, and I also smoked a pipe. I think I once tried to give up both by switching to cigars.

We tried to stop smoking several times, and each time it made us wonder what the point of living was. Not smoking destroyed the pleasure of going to a bar for a drink and robbed the morning coffee of all meaning. To avoid making a suicide pact, we decided just to cut down instead of stopping altogether.  We would allow ourselves only three cigarettes a day. During the three-cigarette-a-day period, cigarettes were all we ever thought about. Naturally we started cheating. There were binging episodes that filled us with self-loathing. Suicide was back on the table.

We decided to try something entirely new. When we wanted a cigarette, say, after dinner, I would drive to a bar and buy a couple of cigarettes from one of the patrons. That way, getting the cigarettes would be such a production that it would force us to stick to our plan and cheating would be out of the question because there wouldn’t be any cigarettes around the house to cheat with.

For a while buying cigarettes from smokers in bars worked like a charm. I would go into a bar, sidle up to a table of smokers and say:

“Hi, I’m trying to cut back on smoking, and I don’t want to buy a pack. Could I buy a couple of cigarettes from you?”

There is certain camaraderie among smokers, and no one ever refused. Some didn’t want to take the money—I offered a dollar—but I insisted, saying that not paying made it too easy to smoke.

This bizarre method worked well for a time. Sometimes I drove out to buy the smokes twice or three times in one night but always to different bars, of course. Over time, though, buying cigarettes from strangers became tiresome. One night I went into a bar, and the smokers at the table I approached had sold me cigarettes the night before. It was awkward.

I decided to buy a pack of cigarettes, hide them in the trunk, and pretend to drive to a bar. I just drove around the block and waited for ten minutes and then returned with the smokes from the trunk. Sometimes I had an extra smoke in the car while I was waiting for enough time to pass to go back.  It dawned on me that my wife would get suspicious if I kept bringing back the same brand all the time, so I bought four different brands and hid them all under the spare tire.

More and more I started getting a cigarette from the packs hidden in the trunk and smoking on the sly. Once when I was stopped at a red light, I rushed to fetch a cigarette from the trunk, forgetting to put the car in park. Smoking started to be dangerous in ways the Surgeon General never imagined.

I knew it all had to stop when I started to fear that my wife would have a flat tire and discover the cigarettes.

Eventually we both quit successfully with the help of nicotine gum.  Another factor, though, was that smoking really went out of style, at least in our milieu. Fewer and fewer places even allowed smoking. Finally it was banned in bars and restaurants. Not having to watch others smoke made quitting much easier.

Looking back, I’m happy we never tried heroin or cocaine.