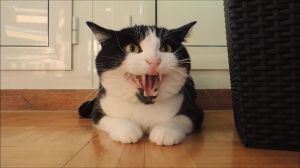 As our kids were growing up, we went through several cats, a couple of guinea pigs, and one dog, a Norwegian Elkhound, as family pets.  The first cat we had was a black and white cat that for some reason we named Pumpkin. Maybe we had got Pumpkin close to Halloween. She was a nice cat, especially in contrast to Benito, a cat we acquired much later and named after Benito Mussolini because of his dark personality. Today, we might name him Donald. Pumpkin was a pretty ordinary cat, but we will always remember her because of one incident.

My wife Rendene called me at work one day and said that there was something very odd about Pumpkin. Her fur seemed to be standing up as though she was frightened, and she was acting strangely, meowing incessantly. She was so concerned that she called our vet and described the symptoms.

The vet, who had spayed Pumpkin,  told her to look for lesions in the cat’s skin. When I got home, I could see why my wife was worried. Pumpkin’s fur was standing up so much that it looked longer than normal. Our daughter Sara, who was about 5 at the time, kept insisting that it wasn’t Pumpkin.

“No, Sweetheart, Pumpkin is just ill. Maybe she ate something poisonous  or rolled in something.”

Sara kept insisting that it was a different cat

I imagined Sara probably wouldn’t recognize me if I suddenly contracted leprosy or something. The perceptual capacity of young children is not fully developed.

I called the vet and said we saw what might be lesions in the skin, but we couldn’t be sure.  Could the cat have eaten something that would cause its fur to stand up? The vet asked if Pumpkin was foaming at the mouth or seemed to be in pain. From the way she was meowing, I thought she might be in pain. Finally he told us to bring her in.

Pumpkin was terrified of riding in the car, and we didn’t have a proper cat carrier. The last time we had her in the car, she went berserk.   We wrapped her in a towel with only her head showing, so she couldn’t scratch us. The meowing became frantic and sounded more like howling. On the way to the car she struggled so violently that I dropped her, and she scrambled out of the towel and ran up a tree. Her fur was really standing up now. With a can of tuna we finally coaxed her far enough down to grab her and wrap her in the towel again. The kids held the towel-wrapped, plaintively meowing Pumpkin in the back seat while I started the car. As I was pulling away, Sara shouted, “Look!”

We all looked, and there was Pumpkin standing by the front door. She yawned and did a stretch. It took me a minute to realize what was going on. The cat we had wrapped in a towel wasn’t Pumpkin just as Sara had insisted. It was a cat with exactly the same black and white markings, but with longer fur. On closer inspection, the imposter Pumpkin also turned out to be a male.

Sometimes when I count my blessings, I remember to be grateful that we didn’t make it to the vet that day with a cat he would have immediately recognized wasn’t ours.

2 thoughts on “Taking the Cat to the Vet”