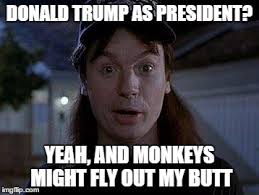 The notion that Donald Trump has been elected President is just one of two competing narratives or truth claims, if you will. That he won the most Electoral College votes and hence the election is one narrative, but here is a competing narrative:

The Electoral College is a social construct that was originally intended to keep the masses from electing someone uniquely unqualified to be President. In fact (more about facts later), Donald Trump is uniquely unqualified to be president. Hillary Clinton, who is uniquely qualified to be President, won the popular vote, so the masses actually didn’t do what the Electoral College is supposed to keep them from doing, thus completely obviating the need for it to do anything. Hence Donald Trump was not elected President.

2 thoughts on “Donald Trump Was Not Elected President”