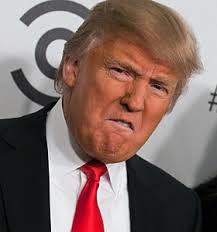 The Republican presidential candidates field is crowded once again with crazies the Republican establishment would rather not have to deal with. But one particular crazy is uniting all the other crazies and the establishment in fear and trembling, and that crazy is Donald Trump. So far, Trump is the leader of the pack. He scares the rest of the field and the establishment because he pretty much outcrazies the rest and because if they piss him off, he might just run as an independent, repeating the Ross Perot spoiler factor.

Pundits seem to find his appeal rather mysterious.  I can explain it in one word—farts. That’s right. Farts and farting explain the Donald Trump phenomenon.

Most of us don’t mind the smell of our own farts. It’s a fact. There are probably good evolutionary reasons for it. The bodily secretions of others can be toxic and dangerous for us, but our own bodily secretions, not so much. So when somebody else farts, it smells disgusting, but when we fart, to us it smells pretty good.  For the Republican base, listening to Trump is very much like smelling their own farts. He’s saying things that sound as if they’re coming from the bowels of the base. When he calls Mexicans coming across the border thugs and rapists, he’s articulating what the base thinks but is often careful not to say in this climate of political correctness. It’s like they want desperately to fart but don’t dare.  When he rages on about how stupid Obama is, and what losers all the so-called elites are, and how he would bomb the hell out of Iraq’s oil fields, it feels to some Republicans the way it feels when you’re lying in bed and release a lot of pent-up gas in one gigantic fart.  What do you do? You pull the covers over your head and breathe deeply. It feels so good, and it actually smells great.

So the Republican base loves the relief he provides, but why does Trump get so much media attention? Again, it’s the fart factor.  His constant outrageous pronouncements, especially in the current climate of technologically induced cautious circumspection, is very much like somebody openly and loudly farting in public. It’s fascinating to watch. It’s also fascinating to see the look of envy on the other Republican candidates’ faces. They would love to fart in public, but they fear that somebody will pick it up on a cell phone and put it all over social media. Trump doesn’t care.

And therein lies the big Republican problem. Loud smelly farts appeal to the base, but probably not so much to the general electorate. The successful candidate needs to do some farting to get the nomination, but the Republican establishment counts on him or her to stick to small, discreet, deniable farts. Once the nomination is secured, they can cover up the smell.

There’s a seductive conspiracy theory out there that the Clintons are the ones supplying the beans for the Trump phenomenon. After all, Trump was for many years a Democrat and a promoter of liberal causes. He knows the Clintons. Hilary was a guest at his wedding. Once he has thrown the Republican field into hopeless, flatulent disarray, it’s not hard to imagine him on the phone to Bill: “Mission accomplished, sir.”

One thought on “The Trump Phenomenon”