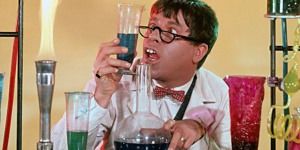 A prevalent stereotype about intellectuals and academics is that while they’re very intelligent in academic matters, they generally lack emotional intelligence (or street smarts, or some other desirable trait). Sure they’re very smart intellectually, but they’re nerdy and can’t relate to people. It’s as though most intellectuals are somewhere on the autism scale, ready to hold forth on their academic specialities, but socially awkward, slow to pick up on emotional cues, and really bad at small talk. The odd-ball, socially awkward professor is a stock figure in American films and has to do more with American anti-intellectualism than with reality.

No doubt some academics are socially awkward (so are some chefs), and some have internalized the stereotype, affecting a bumbling, absent-minded professor image, thus helping perpetuate the myth. This unfounded belief in a special emotional intelligence that is somehow lacking in the academically intelligent is part of a popular mythology about various aptitudes and personality traits being located in different parts of the brain. The most notorious is the discredited left brain/right brain myth, sometimes called hemispheric dominance or “brainedness.” Supposedly those who are left-brain dominant are logical, and those who are right-brain dominant are creative. Guess which side of the brain those who promote this pseudoscience are dominant in.

One can easily see the attraction of these myths. It’s nice for those who largely failed or didn’t shine at school to think that they’re at least more emotionally intelligent than those who did. If I can’t follow an argument, it’s a lot nicer to think that I’m right-brain dominant and highly creative than to think that I’m just slow.

A recent study in which a group of Vietnam veterans were tested for IQ and emotional intelligence found that the two are closely linked. The study also found that in brain scans, the same regions of the brain are involved in both emotional and cognitive tasks.  The study’s co-author Aron Barbey, a neuroscientist at the University of Illinois, said that “Intelligence, to a large extent, does depend on basic cognitive abilities, like attention and perception and memory and language. But it also depends on interacting with other people. We’re fundamentally social beings and our understanding not only involves basic cognitive abilities but also involves productively applying those abilities to social situations so that we can navigate the social world and understand others.”