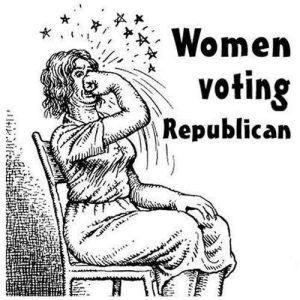 “If Hilary Clinton can’t satisfy her husband then what makes her think she can satisfy America?” –Donald Trump

“If it’s a legitimate rape, the female body has ways to try to shut that whole thing down.”—Former Republican Congressman Todd Akin, 2012

“Money is more important for men. Take a hypothetical husband and wife who are both lawyers. But the husband is working 50 or 60 hours a week, going all out, making 200 grand a year. The woman takes time off, raises kids, is not ‘go go go’. Now they’re 50 years old. The husband is making 200 grand a year, the woman is making 40 grand a year. It wasn’t discrimination. There was a different sense of urgency in each person.”—Republican Senator Glenn Grothman

“This contraceptive thing, my gosh it’s such inexpensive, back in my days we used Bayer aspirin for contraception, the gals put it between their knees and it wasn’t that costly.” –Foster Friess , Conservative Christian donor to Republican candidates

“She wants to be paid to have sex. She’s having so much sex she can’t afford the contraception. She wants you and me and the taxpayers to pay her to have sex.” –Rush Limbaugh on Sandra Fluke wanting her insurance that SHE pays for to cover the cost of her birth control

“Personally I’d like to make a law that mandates a woman watch an abortion being performed prior to having a ‘surgical procedure,’” –State Rep. Terri Proud (R-AZ)

“Good heavens! I’m sorry I just looked up at Madeleine Albright and she’s … No, normally it burns our eyes out … and look at the neck skin on her … does she kind of look like a turkey? …. Look at her eyes and her nose. She looks like a turkey.” –Conservative Radio Host Glenn Beck

“For Democrats to reduce women to beggars for cheap government-funded birth control is demeaning to the women that I know who are far more complicated than their libido and the management of their reproductive system.” –Mike Huckabee, Former Governor of Arkansas and candidate in the Republican Presidential primaries

“The facts show that people who are raped — who are truly raped — the juices don’t flow, the body functions don’t work and they don’t get pregnant. Medical authorities agree that this is a rarity, if ever.” –Republican Rep. Henry Aldridge

One thought on “The Women’s Vote”