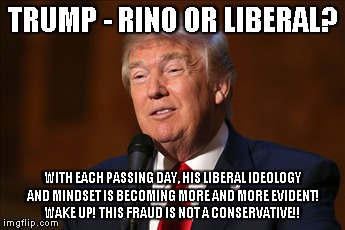 What if Donald Trump the con artist has actually conned the Republican right wing and ultimately the whole country? What if all his right-wing rhetoric has been a gigantic scam and in terms of actual policy he will turn out to be the savior of the liberal vision— a sort of “Nixon to China” for liberals writ large?

What if the racist questioning of Barack Obama’s place of birth that launched Trump’s political career was just a ploy to gain a foothold in the Republican base, and Trump really isn’t a racist at all? What if the narcissism and the continual exaggeration and lying are an act? Could it be that Trump has shrewdly exploited the celebrity culture in order to transcend it? Having gained the trust of the wingnuts by speaking their language, can Trump now convince them that climate change is real, tax cuts for the rich don’t work, and only a massive government stimulus program to repair the country’s crumbling infrastructure will create jobs for the working class to replace the manufacturing jobs that are never coming back?

Maybe the combination of pledging to move the U.S. Embassy to Jerusalem and using anti-Semitic tropes in his campaign ads has gained him enough credibility on the extremes of both sides to broker a peace between Israelis and Palestinians.

Wouldn’t it be nice if Trump turned out to be a dream instead of a nightmare?